Evilo is a cruel Evil Lord with electric powers which he use to destroy villages. Unlike most of the Evil Lords he is part of Noire's scheme to resurrect the Ultimate Evil Lord.

He first encounters the Hero in quest 8:Village in Danger in which he uses his lightning powers to destroy villages and defeat a strong warrior who tried to protect the village by sneaking into Evilo's  lair through a secret passage. Ultimately he is defeated by the Hero, but manages to escape. He returns to aid Black Knight Lord Zain in quest 19: Great Plains, where he is once again defeated. 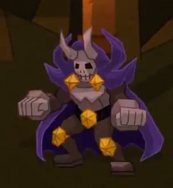