Half Minute Hero Wiki
Register
Don't have an account?
Sign In
Advertisement
in: Characters, Evil Lord, Hero 30,
and 2 more

"Looks like we're in for the long hall. Remember what the evil lord said? Someone is spreading the Spell of Destruction to others." -Time Goddess

Noire is an ancient power-hungry magician and the primary antagonist of Half-Minute Hero.

Noire is first mentioned by Hackein after being defeated by the Hero, when he reveals the existence of a man who is travelling the world teaching the Spell of Destruction to evil beings. It is this discovery that set's off the Hero and Time Goddess's journey as they follow Noire across the land stopping each of theEvil Lords he manipulates. He first appears in quest 9: Beautiful Evil Lord (quest) after he kidnaps Millenia as a means to trick the Beautiful Evil Lord into destroying the world. The Hero tracks him down to his secret lair where he is holding Millenia. Noire realizes that he is responsible for stopping all the previous Evil Lords from destroying the world. After introducing himself "for no apparent reason" he explains his goal to create chaos and revive the Ultimate Evil Lord. He tries to fight the Hero, but he is easily defeated and Millenia is saved. However, before he escapes he curses Millenia so that she takes the shape of a bat, making him the sworn enemy of the Beautiful Evil Lord.

After defeating the Ultimate Evil Lord, Noire absorbs her power and becomes the REAL final boss.

Watch out cause you need to be level 53 or higher to defeat him GOOD LUCK! 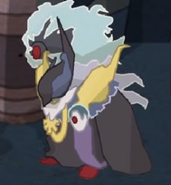